ARGUS, from Issue to Vision to Solution

The Issue? The need to roll-out tens of thousands of control systems for MV/LV secondary substations
The liberalization of the European energy market, the on-going transition to renewable energy sources and the wide-scale adoption of domestic generation, electric vehicles and heat pumps have brought with them a host of challenges to the distribution system operators (DSOs), on top of those posed by aging infrastructure and capacity issues. The increased load, and the now bi-directional energy flows, have made the well-behaved and easily predictable MV/LV distribution system a thing of the past.
Today, it is widely recognized that the most cost-effective solution for a DSO is to embrace the active management of generation and loads on all levels of the electrical energy system. For active grid management, knowing the true system state and having the ability to remotely diagnose problems and adapt the system to isolate faults becomes a basic necessity; not just on the larger sub-stations, but also on the smaller distribution cabins. This implies the roll-out of thousands to tens of thousands of control systems in each country. Generally speaking, the European DSOs know how to make the transition, supported by experience and years of academic and industrial research. What they lack today are affordable tools...

For active grid management, knowing the true system state and having the ability to remotely diagnose problems and adapt the system to isolate faults becomes a basic necessity; not just on the larger sub-stations, but also on the smaller distribution cabins.

Bausch Datacom Vision on the issue: Cost effective but also functionally effective!
The mission of a DSO is to provide society with reliable energy transport, at an acceptable cost. It is on these metrics that most regulatory performance criteria are based, making them the key concerns of a DSO, aside from making a sufficient profit in case of a deregulated utility. Broadly speaking, there are two, main use cases for grid automation: reliability of supply and operational grid capacity maximization. Both cases need measurements installed at all grid levels.
Firstly, there is the ‘Reliability of Supply': The reliability, often expressed in "customer minutes lost" and "energy not served" can be enhanced by fault prediction, faster fault location, and remote grid reconfiguration to isolate and bypass affected parts of the system. Wide-scale measurements of the electrical quantities, supported by specialized features, must be integrated by the DSO in the state estimation (see below) of their distribution management system (DMS) to coordinate efficient actions.
Secondly, the need for ‘Operational Grid capacity Maximization'. To optimally manage the capacity of an electrical network, state estimation is a core necessity. Through a detailed model of the network, and an (in)complete set of measurements, a sufficiently detailed view of all the power flows in the system can be computed. From this power flow, the actually available capacity at all points in the system is derived. The more measurement points that feed the computation, the more reliable and accurate the state estimation becomes, and the less uncertainty there is on the outcome of actions. 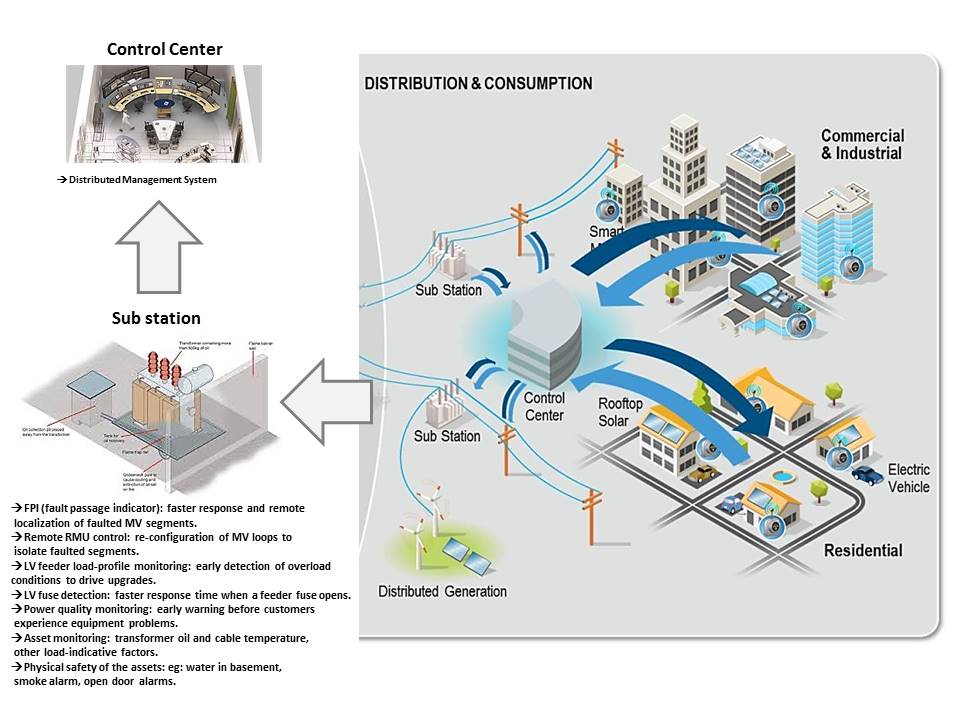 Bausch Datacom solution: ARGUS portfolio
To achieve both cost and functional effectiveness, 42% of the countries already have a strategic roadmap in place for the implementation of smart grids. What is lacking are affordable tools. Bausch Datacom believes that successful technologies and products need to be developed from the perspective of the MV/LV substation, but also from the customer load/generation balancing perspective, in order to maintain an efficient and cost-effective distribution system.
From its inception, ARGUS was based on a modular, software-defined principle implemented on a flexible hardware platform. This allows the primary sensor data to be shared amongst different services. The various functions needed by the DSO then become remote-updatable software modules. Guided by the functional requirements from various DSO, the ARGUS system is split in several hardware modules that are interconnected using industry-standard busses for third-party interoperability. By modularizing the system, solutions can be both functionally- and cost-adapted to the specific site requirements. The DSO only has to install what is needed, and can upgrade later.
For instance, present Power Quality meters are expensive tools, and thus used selectively. As a result, many cases of poor PQ go undetected. Aside from being damaging to customer equipment and grid assets, poor PQ is indicative of areas that need upgrading. Especially when active grid management will be used, continuous PQ monitoring gains importance. ARGUS provides basic PQ functions as part of the core module, with an extension module for advanced PQ. Both were developed by AGH University in Krakow.
Also, improved Directional Fault Passage technology (FPI) was developed by the University of Leuven and KIC. Using this information, repair crews, or remote operators, can efficiently re-configure a faulted MV loop to bypass the damaged section and restore supply. Direction-sensitive FPI devices are needed in systems with distributed generation, and often require voltage sensors. New, patented technology removes this costly requirement for isolated grids, as used in several European countries. 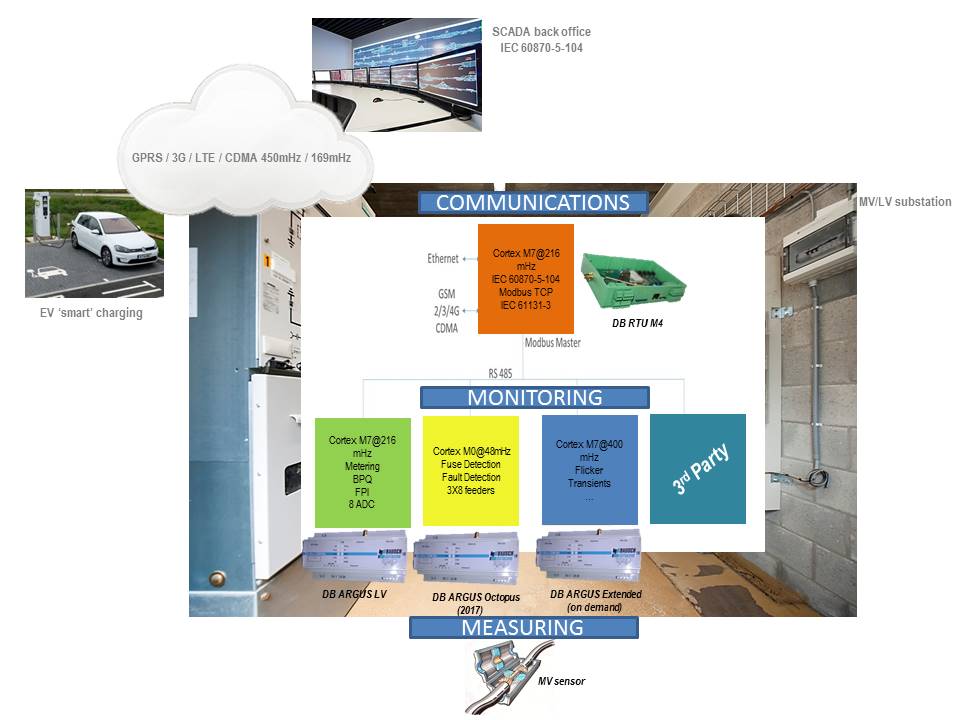 From its inception, ARGUS was based on a modular, software-defined principle implemented on a flexible hardware platform.

Measuring voltage on the MV bus traditionally requires bulky and expensive sensors. A key issue is that these sensors have to fit in the MV compartment of the switch-gear, a highly safety-critical area with little space to spare. Traditional sensors also take-up most of the budget DSOs can allow per installation for a wide-scale roll-out. A new type of compact sensor - developed by the University of Leuven, Eandis, and KIC InnoEnergy and industrialized by Nexans and Bausch Datacom - could be up to three times lower in cost, while still offering a target accuracy of Class 0,3 to 0,1. 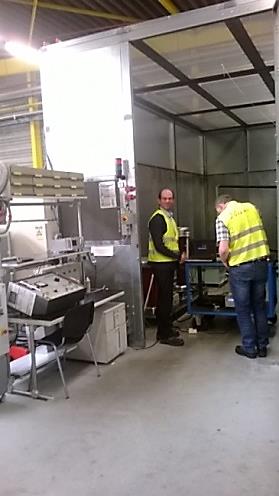 High-Voltage measurements in the labs of Nexans with the first prototypes of the mid Voltage sensor, October 2015.

Finally, with the increased deployment of EV charging islands (both parking lots and at home) in most European countries, DSOs are looking to counteract the negative effects of these expanding and difficult to plan loads, and exploit the positive effects their inherit storage can have on the grid. In order for the grid to support the EV evolution, remote monitoring, aggregation and control of EV charging is needed. Bausch Datacom's collaboration with eNovates, a charging and aggregation technology provider, will surely lead to a ‘second' generation of grid-aware smart charging infrastructure'. 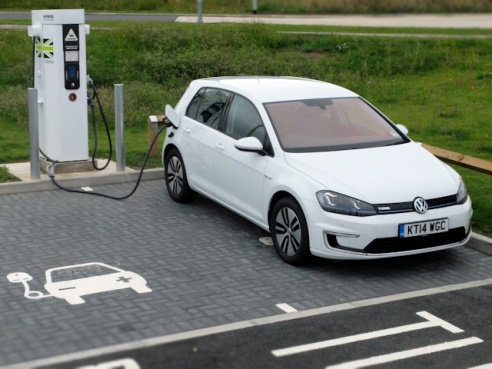 In order for the grid to support the EV evolution, remote monitoring, aggregation and control of EV charging isles is needed.

There are no comments yet

arrow_upward Back to Top
close